Heading back out tonight to pick up Adina from Debate Camp, Joel and I had a quick dinner at Lime.  I love eating there, I get to sit outside, people watch and chat with people.  For some reason the atmosphere lends itself to a cozy, neighborhood feel and the people are relaxed and actually smile and talk to one another from table to table.

While waiting for the food to arrive, I saw this cute puppy and I was lying flat on the floor next to him taking the first shot.  The other shot I took while the woman wasn't paying attention to me.  Then I played with Photoshop a bit to get that painted effect.
Posted by Jody Leshinsky at 8:52 PM No comments:

Well, maybe not that lazy!  Adina started Debate Camp on Friday.  It is every day, seven days a week for two weeks from 9 a.m. to 8 p.m.  So this morning Joel and I dropped her off and then headed downtown Fort Lauderdale.
We drove down Old Griffin Road which really feels like old Florida.  While we were sitting at the red light, I snapped this shot of the Tropical Acres sign.  I adore this sign.  Not only is it a symbol of what Fort Lauderdale was, but it is also a very cool neon sign that is a landmark.  I have only eaten at this restaurant once but it was fun.  It is very old fashioned, but the food is good.
I wanted to see how the Urban Market does in the summer.  Well, after we found a nice parking spot near the Josephine S. Leiser Opera Center (not there, across the street where we paid!), we found out that there were only three vendors.  I felt bad for them.  There were absolutely no people visiting them.  I suppose it is a bit hot during the summer and we all have places to be and vacations to travel on, but still, the Riverwalk is so pretty early in the morning and it is fairly well shaded so you can stay cool.

I didn't want to leave right away so Joel found a nice picnic table to sit at and I wandered along the New River with my camera.  Not really that inspired, but I did snap a few shots.
Then it was off to the West Side School which houses the Broward County Historical Commission.  My friend and colleague was working there today and he gave Joel and me a personal tour of the entire facility.  I have been there many times, but Joel hasn't.  Joel was impressed with all the "old stuff" that they have housed in their archives.

As we were leaving I saw this tree that had such pretty flowers on it.  So I stopped to snap a few shots of it.  I would LOVE to have this outside my house.
Posted by Jody Leshinsky at 6:38 PM No comments:

We went with Rachel in the morning, but it was raining so they told her to come back in about an hour.  So we went to get a bagel and coffee.  When we came back, it had stopped raining, but there still were no people there.  So I walked over to the baseball field and took photos of the K9 team training for their exhibition later.

I really liked these photo.  I wouldn't want this dog coming at me, even with all the protection that they wear.  Just a little scary!
Posted by Jody Leshinsky at 4:03 PM No comments:

July 4 is a fun day for the Leshinsky family.  We always know that we will have a bunch of people at the house, lots of food and a few "fireworks."  It is usually a pack that Joel picks up somewhere for about $20 and the most it does is make a lot of noise and smoke, but it is fun until the bugs start to bite!
This year we had Lynn and Richard (back just one day from their trip to Italy), my dad and Elaine, Gert and, of course, Noah!

After dinner and dessert, Joel and Richard set up our "fireworks" on the back patio.  Then they decided to move to the grass.
One of my favorite shots is the one with Joel standing on the hill next to the fireworks with a flashlight headband!  And of course the other one that looks like we have a superhero in the backyard!!
Later in the evening, Adina and I were playing with my tripod, an open shutter and a sparkler!

Posted by Jody Leshinsky at 3:46 PM No comments:

Just a peaceful evening.  Everyone doing their own thing . . . homework, watching TV, taking showers.  Everyone was relaxed and enjoying their space.  Noah was doing homework while Rachel watched her "stories" (Law and Order!!).  Adina was in the shower and I was just admiring the fact that every square inch of her wall space is filled with her own creations!  Joel was sound asleep in bed.  And I just had to snap this one photo of the poor fish.  Adina has actually created a brand new world in there.  It is its own environment.  Somehow the fish live on and adjust to whatever it is in there.  We know it needs to be cleaned, it is just so overwhelming to think about it.

Posted by Jody Leshinsky at 11:14 PM No comments:

Just a brief moment in time . . . drinking time at the Leshinsky sink!  First Newton with Grace getting closer than I have ever seen her get to Newton.  It was brief because about two seconds later there was a lot of screeching and paws flying!
Posted by Jody Leshinsky at 11:00 PM No comments: 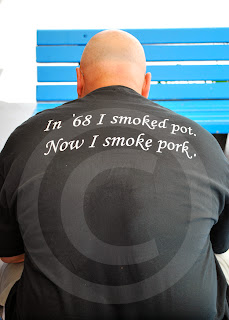 Thanks to a shrinking budget, County employees have five unpaid furlough days.  They usually wrap them around another holiday so we end up with very long weekends.  So I had Friday, July 1st off and Joel and I spent it together, just taking our time and doing almost nothing.
We did go down to Nissan to get my second key for the car (that took an hour because they have to program it).  Then on the way back we headed over to our new favorite Mediterranean restaurant which happens to be very close to our house. Rachel and Noah met us there for lunch prior to them leaving for Orlando (we sent them to Disney for one day).
And as we were walking into the restaurant, Joel and I saw this guy sitting on a bench wearing this shirt.  We just loved what it said!
Posted by Jody Leshinsky at 10:55 PM No comments:

So, I am catching up again, what else is new?  These photos were taken on Fathers Day.  We invited Lynn and Richard, my Dad and Elaine and Michael for dinner.  Joel loves to cook for family and friends and we much prefer his cooking and the comfort of our home to restaurants on these types of celebrations.

As we were getting ready, I had just set the table and Grace decided to jump up and get comfortable right in the middle of the table.  Probably not the most hygienic thing to have on your table, but what the heck?  She is like a family member.  I did chase her off after I snapped this photo.
Then I peeked behind the couch and found Newton mid-yawn.  He looks rather menacing, but it was nothing but a sleepy moment that I froze.
Then I thought the photo of Elaine holding a glass of wine as she was searching for something on the iPad was just very ironic.  The others are of presents being opened and enjoyed.

It was a very nice evening and everyone seemed to have a good time.

Posted by Jody Leshinsky at 10:47 PM No comments: