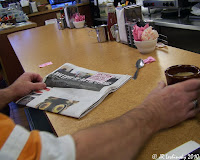 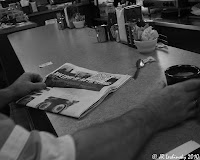 Singin' in the Rain

Today was the Jazz Picnic in the Park. We got about two hours into the event when the heavens opened up and rained a little too hard for us to try and stick it out. We had our umbrellas but it wasn't enough. Once the wind started to blow . . . we packed up and went home and on to other Sunday things. But here are a few shots that I took with my old Kodak Easy Share (my Nikon is still in the shop :(

Elaine was perfectly dry and glowing under her yellow umbrella.

Joel was oblivious to the rain. He was perfectly content to just sit and chill in the rain. That is Marsha on his right and my Dad on his left.

My Dad looked like he was having a good time. Still can't believe that he is 91 years old!
Posted by Jody Leshinsky at 4:20 PM No comments:

Adina has been having a bit of trouble with Algebra. So on top of sending her to tutoring twice a week at school, my neighbor, Robert, has been coming over to help Adina to understand the work.

I am useless when it comes to math. I once tried to help Rachel with fractions when she was in fourth or fifth grade. Well, she got them ALL wrong and her teacher told her to NEVER ask her mom for help on math again!!

How embarrassing is that??

Posted by Jody Leshinsky at 10:11 PM No comments:

So I know that I am uploading in the wrong order, but I am so far behind on blogging. I don't know why I have to be motivated to upload lately. I have been busy, but not any more than normal. But my camera is still in the repair shop in North Miami. I am sad to not have my Nikon D40 but the shutter just stopped working.

I went back to using my Kodak Easy Share, but it frustrates me because I can't always focus on what I want to focus on.

These two shots were taken two weeks ago. I was waiting for Jose to pick me up because we went up to Coral Springs to do a photo shoot for work and I caught Newton walking around on the banister on the second floor!! Scary but I find that it is best to just let him do his scary walk and he jumps off in a very safe fashion when he is good and ready.

In this shot he was just hanging on and looking downstairs. I thought he looked pretty funny!

This is a photo of Barry Treu whose job we were able to save thanks to a stimulus grant created by the American Recover and Reinvestment Act signed into law by President Obama. We, meaning the Cultural Division, received a National Endowment for the Arts grants and Coral Springs Museum of Art received some of this grant funding. Barry is walking a group of disabled adults through the outdoor sculpture garden at the Coral Springs Museum of Art.

We had a really good time taking these photos and the challenge was to be as invisible as possible so that we didn't disturb the class. In addition we weren't allowed to take any images of these adults faces because we didn't have any media releases. But we were quite successful!

Posted by Jody Leshinsky at 9:39 PM No comments:

A Lesson in Advocacy

On Wednesday, March 24, I traveled up to Tallahassee for one day. It was an easy flight, although it was at 6:45 a.m. There were only about 50 people on the plane and I was at the State Capitol by 8:30 a.m.

My job was to visit with as many senators and representatives as possible and deliver the message of the importance of the arts to the State of Florida and how the arts benefit the economy, arts education, kids at risk and on and on. I had my elevator speech, my business cards, my comfortable shoes and of course, my camera.

I must have walked at least ten miles and I must have gotten lost at least that many times. The State Capitol is so very confusing with long, narrow hallways, confusing elevators that don't stop at all floors but filled with smiling faces willing to help you at every step of the way. So it wasn't that terrible!

I just wish that there were more people up there to go in groups of threes and fours when visiting the legislators. It does make a difference.

I watched as the Nursing Practitioners showed up in four large charter buses and wore their long white lab coats and stethoscopes around their necks. They were EVERYWHERE. Including in the House of Representatives. When their legislator recognized them and they ALL stood up, THAT made quite an impact.

If there were a huge delegation from around the state in charter buses for the arts, I think our legislators would take us more seriously.

Check out the Romero Britto artwork on the museum's plaza! 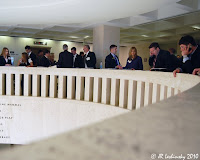 Love this photo of all the aides and lobbyists doing business around the rotunda as they wait for the House of Representatives doors to open up for the next meeting.

The Old State Capitol. Loved the two guys walking in front. They were loving the fact that I was taking their photo and they were grinning from ear to ear for me.

The State Capitol is REALLY tall

I am sitting in the East Gallery of the House of Representatives. I had a lovely chat with Zac Cohen who is one of Representative Evan Jenne's aides. I was recognized by Representative Hazelle Rogers. I had to stand up when she called out my name. Very nice of her. I sent her a thank you note. Still, it would have been better to have a large delegation with me.

Taken from the basement of the Rotunda. I called this one "Circle of Life"
Posted by Jody Leshinsky at 10:16 PM No comments: