So, after our peaceful breakfast, we drove up to Delray Beach with our friends, Richard and Lynn to go to the Delray Affair . . . it is an arts and crafts festival that is now in its 48th year.

It was a huge event, and the entire street was closed to traffic and there was booth after booth of fun artsy stuff to look at. I, of course, am always more interested in the people attending and their reactions.

This first photo was taken by Joel on his cell phone. It is Lynn's hand during a very odd sound therapy session that we all took turns at. This guy places large brass bowls on your chest, near your crotch and near your feet and makes them vibrate and make resonating sounds and it goes through you and really relaxes you. It was weird and cool at the same time. I felt like I had taken a step into the 60s and was surrounded by California hippies! I was so relaxed that I had to sit in a chair to gather myself before I could walk again!

In the same booth was another woman doing yoga and relaxation with an instructor. Her dog was totally into the relaxation too. I had a giggle at this one. 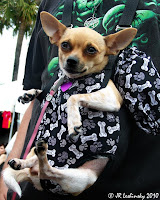 This cute guy was so content in just hanging around in this baby carrier. I had seen him earlier and he looked scared and stressed, but not here! 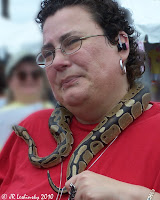 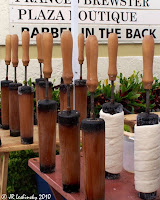 Posted by Jody Leshinsky at 9:36 AM No comments: