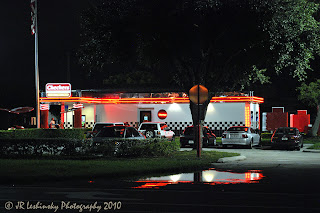 Another weekday evening spent running home from downtown Fort Lauderdale, no changing clothes, but grabbing campaign materials, my campaign notebook and my camera and off we went to another homeowners meeting.  After listening to the other candidates do their "blah blah blah" we finally went to dinner at about 9 p.m.  This was a typical evening for us for the past two months.  Can you understand why I the day after Election Day I just couldn't get out of bed until about noon?

So as we were driving from point A to point B . . . I was sitting in the back seat because Adina wanted to sit with her Dad in the front seat.  I was playing with my camera, which I didn't get to do much of, only took campaign-related photos . . . not my favorite photography.  I really do NOT enjoy taking photos of people!

I snapped this shot of Checkers as we were approaching the traffic light.  I loved the way the puddle reflected the red neon.  It looks like the puddle is glowing. 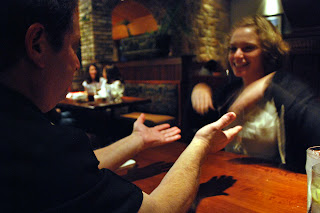 The other photo was taken at the restaurant.  Adina and Joel were bored (not to mention very hungry) as we were waiting for the food to arrive.  So they were playing that hand-slap game.  I made sure to move all of the glasses of liquid far away from them so that I wouldn't be the one wearing their drinks on my lap or worse, on my camera!!

I really liked this photo because it showed the impish look on Adina's face as she was playing this dumb game.  She is still a kid and it is nice to see this look on her 15 year old face now and then.  Most of the time there is absolutely NO expression on her face . . . that is unless she is with one of her friends.  But then again, I remember being like that with my parents too.  I don't think I got over that until I was about 30!
Posted by Jody Leshinsky at 9:03 AM