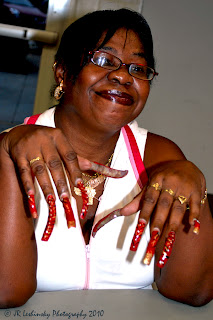 Another weeknight. . . . another homeowners meeting.  We arrived early this time.  Too early.  We got to know the park staff and some of the residents.  This lady told us about her incredibly long nails.  She hasn't cut them in years!  It was both weird, gross and intriguing.  And she allowed me to take photos of her nails.

Unfortunately, when the president of this homeowners meeting arrived, we were told that this was not a Candidates Night and Joel would not be allowed to speak.  It was such a stark and cold reception, that we were overwelmed at the response.

So we left, but this was the only meeting . . . which are all public meetings by the way in public facilities . . . where we felt unwelcome.  We didn't dwell on it.  But I had to mention it to get this out of my system.
Posted by Jody Leshinsky at 11:09 AM