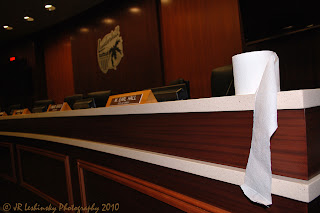 On September 29 there was a "Meet the Candidates Night" at Lauderhill City Hall.  This was one of the better forums that I attended because it was conducted by the League of Women Voters.  They explained how the evening would be handled.  In addition, the best thing that they did was to distribute a four page hand-out that explained, in layman's terms, the amendments and resolutions that were to be on our ballots.  They didn't tell you "HOW" to vote, they only told you what it meant if you voted yes, or if you voted no.  Sometimes the language, no actually, the language ALWAYS is confusing to voters as to which way to actually vote to get the outcome that you actually want.

So, this photo was taking just prior to the event starting.  For some unknown reason, there was a roll of toilet paper on the Commission's dais.  I thought of the irony and then someone moved it. 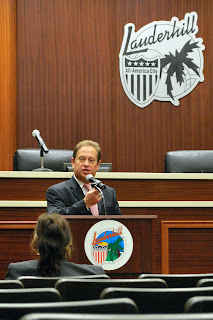 And I thought I would just add this in to show that Joel looked very good as he answered the questions posed to him by the League of Women Voters.

As you can see, there were not many folks in the audience, however, it was being videotaped.  I have a copy of the event, I just never uploaded it to the website, but I might.
Posted by Jody Leshinsky at 8:44 AM