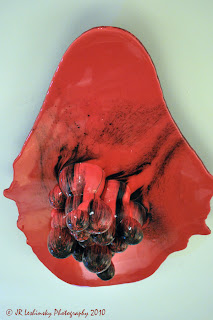 In the middle of all of the campaigning craziness, at work we had our arts consultants fly back into town for the launching of our CreativeBROWARD 2020 ten-year community cultural plan that we have been working on for almost two years now.

In addition to planning and organizing this meeting which was to be held originally at the ArtsPark in Hollywood, but then the RSVPs were too many for the room that they had reserved for us, so we moved it to the Art and Culture Center of Hollywood.

Then the equipment wouldn't cooperate, and we had set up and then move the chairs several times because we were in the art gallery and we wanted to make sure that no one would bump into the sculptures.

However, the meeting went very well, and I ended up sitting with my artist friend, Timothy.  He was teasing me about my new piece which I had titled, "Size Matters."  So right above our heads on the ceiling, was this sculpture.  I took a photo of it and showed it to him during the meeting and I had to shut him up because the two of us were giggling so much.  I had to walk away from him for a while so that we didn't interfere with the meeting!

Oh well, it is a very nice sculpture, and the other ones in the exhibit are too.  I guess the two of us just interpreted this one the same way!
Posted by Jody Leshinsky at 10:55 AM