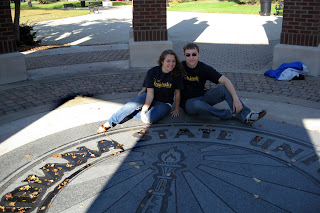 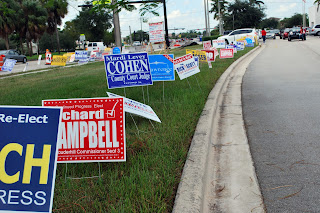 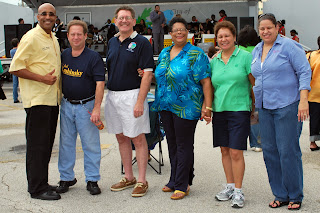 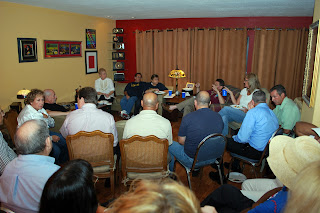 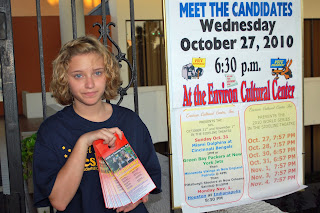 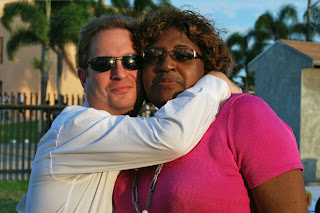 Thought I might upload a bunch of campaign photos all at one time.  These photos were taken in the last few days prior to the Election.  The first photo was sent to me by Rachel.  We insisted on a photo of her at that ISU seal in a campaign t-shirt.  Ok, so we asked for it back in September and she finally got around to it.  But hey, she is busy!

The next was the amazing display of signs at the Tamarac Branch Library where both Adina and I worked Early Voting campaigning for Joel!  I just couldn't believe the dedication of the volunteers.  It was hot as the middle of the summer out there.  We all took care of each other, telling each other to sit down, get out of the sun, have a drink, etc.

The next photo was taken during a Jazz Concert near City Hall.  The crowd in my living room are all of our volunteers hearing our strategies for Election Day.  And Joel is hugging Margaret Bates at a Halloween event at a park.

Definitely a whirlwind of activity.  It was fun.  It was a lot of work.  We found out who are friends are and made new alliances.  But no wonder why neither one of us could get out of bed the day after the Election!!   Not to mention that I was standing on my feet from 7 a.m. to 7 p.m. and then had to go to our friend's home for a "victory" party, which was actually a victory party for Richard since he ran for Mayor unopposed.

Glad it is over, but glad Joel ran.  He got is name out there.  He will definitely have good come from all of this.

But I am definitely glad to have my time back.  I haven't moved from this spot since 8 a, this morning and it is now almost 2 p.m.  I haven't had the luxury of doing this in WAY too long.  Very glad to be back!
Posted by Jody Leshinsky at 1:45 PM