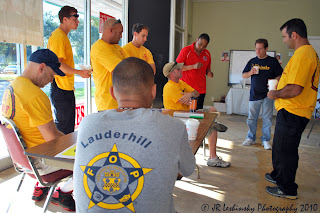 I know that I blogged most of these photos in Joel's blog, but I really liked this photo.  The City of Lauderhill Firefighters and Police really, really believed in Joel and helped him on a daily basis. They volunteered their time to walk neighborhoods and place door hangers on everyone's doorknobs.  They knocked on doors and spoke to the neighbors about Joel (and Margaret too).

They were incredible.  This photo was taken at Margaret Bate's campaign headquarters early on a Saturday morning.  We were talking about the strategy of which neighborhoods to walk, who would be in which neighborhood and how long we were to do this.

We can't thank them enough.  They were out there in FORCE during the two weeks of Early Voting and on Election Day too!  Joel made 70 sandwiches and put them into a huge cooler and the guys took turns driving from polling location to polling location to feed all the volunteers!

It really takes a village.
Posted by Jody Leshinsky at 9:41 AM