Following along my pattern from yesterday, I left the house at 7:30 am with my camera . . . out of the bag next to me on the car seat, and snapped at every opportunity . . . being very careful to pay close attention to my safety!

There was a lot of traffic on Oakland Park Blvd. So I had lots of opportunity to snap away. Most of the shots were boring to me but these few caught my attention. 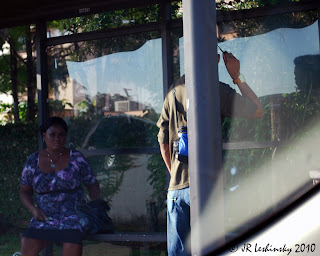 I loved this shot of the woman staring in my direction, probably wondering why I was taking her photo while she was sitting and waiting for her bus. But the interesting feature that I loved was the man using the reflection on the backdrop of the bus shelter as his mirror as he combed his hair. 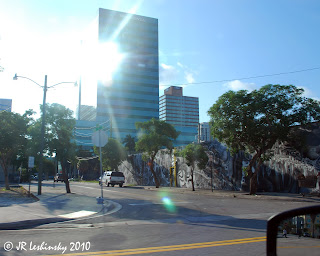 This shot captures the sleek, glass office building towering over the graffiti-styled mural of the 18 Rabbit Art Gallery with the sun just about peeking over the buildings causing streaks of sunlight to stream down over my image. I like this shot because I was driving, holding the camera pointed in that general direction and trusting myself to have the camera settings at the correct levels and pointed in the right direction because I was looking forward and driving! I don't recommend this practice, it really isn't very safe! 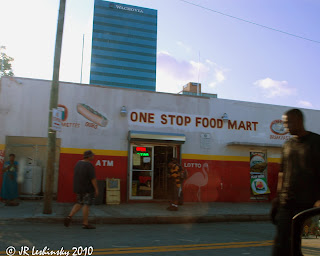 This shot was taken just a few frames later. I love it. It shows the grit of the inner city across the street from the bus terminal in downtown Fort Lauderdale, people rushing off to where ever they may need to be and yet in the distance . . . a very short distance, a building where you know that people are starting to arrive, dressed in their designer clothing, sipping their high-end coffee beverages with funny names that we can't remember what the heck they stand for and about to start their days in their executive suites. 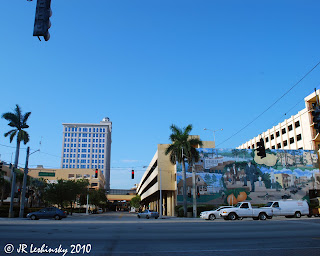 This shot was taken yet a few frames later and since I had a red light, I had time to really focus on what I was doing. I loved the deep blue of the early morning sky, the blue cast on the traffic and the road and yet the bright mural on the side of the government center's parking garage (where I get to park) greets me with historical images that depict Fort Lauderdale's past.

This last shot was taken about five minutes after I walked into the house after work. I found my girls huddled together on Rachel's bed giggling about something that they were looking at on Rachel's computer. I love seeing this interaction between them. I was also playing with the white balance function on my new camera where I press a series of menu buttons to be able to set the white balance for the lighting in that situation. I am not having great luck with this function yet, but I will not give up! It isn't brain surgery!! 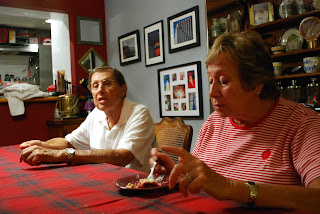 Ok, so one more photo for the day . . . Aunt Marilyn and Uncle Howie came over for dinner. I love this photo because not only do you see my uncle in mid-sentence, my aunt eating the dessert that she said "oh I shouldn't" and my uncle's sweatshirt on the pass-through because he is always cold, but the warmth of the tablecloth (that I normally use in the winter, but I didn't set the table) and my photos on the wall behind everyone just set the scene for a nice quiet family dinner.
Posted by Jody Leshinsky at 10:45 AM