When you think of how you would spend your 30th wedding anniversary, would trips to Paris or some deserted island come to mind? Well, not for Jody and Joel! Instead, we are a bit more frugal than that. Take the down-turned economy, add in pay freezes, furlough days and one child in college and the other in high school and what do you get??? Well you get two very creative people who just basically like to spend their time together. It really doesn't matter where or what we do, but that we are together. 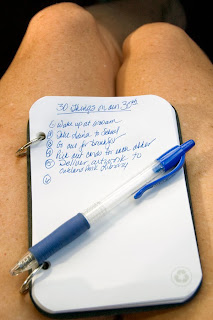 So we started the day early. Joel thought that I would sleep in, but I didn't. I was up and dressed and in the car before anyone, with camera in hand and my notebook and pen. I was going to make a list of 30 things that we would do for our 30th anniversary! 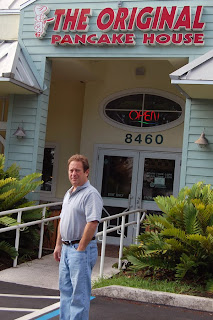 After we dropped Adina at school, we headed off to the Original Pancake House for lovely stacks of pancakes and hot steamy coffee. Doesn't Joel look absolutely thrilled to be there?? 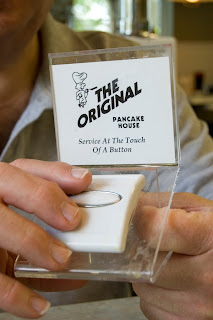 This was on our table. If you wanted your waitress to come back, all you had to do was press the button! I thought it was pretty funny. I would like this kind of service EVERYWHERE!! 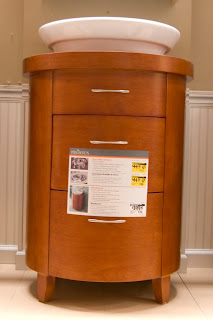 With full tummies we decided that we would do a bit of shopping at Home Depot for items for our two bathrooms that have been ruined due to water damage from a leak from the upstairs bathroom and the brand new air conditioner downstairs. Thank goodness for warranties and home insurance! So this is the sink and cabinet that will be in our downstairs bathroom. I think it looks pretty spiffy. I have memories of my friend, Susan's home improvement project. They found mold in their house and ended up having to demolish the entire house and rebuild it from the ground up! I have a feeling this is going to be a larger project than we bargained for!!! I know what I will be doing all summer! 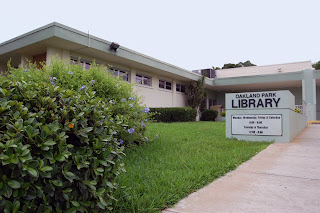 At about noon I had to head over to the Oakland Park Library to drop off two of my photos for an art exhibition there. I stopped for a second to snap this shot of the library as Rachel and I were leaving and heading up to Commercial and the beach for lunch. 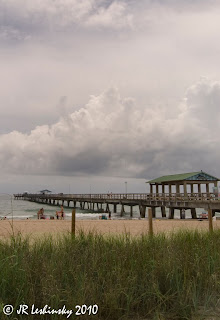 And this shot was taken as Rachel and I sat on a bench waiting for Joel to join us because the restaurant would not seat us until all of us were there. Little did I know that Joel was way down at the Dolphin Mall meeting some very pregnant woman who wanted to sell her unused Nikon D60 because she needed the money. He and Jose drove down there to pick it up, check it out and bring it home to surprise me! I have been wanted a second camera body so that I can have my 18 - 55 mm lens on one body and my 55 - 200 mm lens on the other! Well let me tell you, I WAS surprised and upset and all sorts of kinds of weird emotions running through me. I felt a sudden pressure that now I HAVE to improve my photography and do something with it! But I was also very happy because he got me EXACTLY what I wanted.

What better way to end the day than a huge surprise like that? 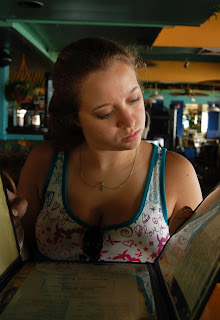 I wanted to include this photo of Rachel as we were sitting inside the restaurant. I loved the lighting on her face and she was very absorbed in the menu and completely ignoring me, which is exactly what I like when taking photos of people's faces.
Posted by Jody Leshinsky at 10:59 PM