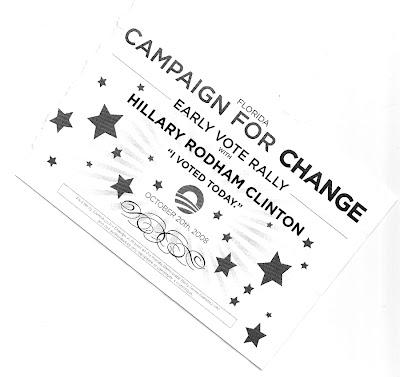 As the campaign is winding down the candidates are focusing on the key states where most of the undecideds live. Unfortunately Florida is a difficult state. We botched it for election in 2000 and now we have a new voting method . . . near and dear to our children's hearts because it is the old "bubble in" the oval with a pencil method. All of us that have taken Regents, SATs or FCAT tests will be very comfortable with this method and then we take our ballot and place it into a scanning machine that reads our #2 pencil marks. However the rest of the population may not be as familiar with this, especially our elderly population. We have a lot of state constitution amendments and charter amendments, not to mention circuit court judges to vote for and the sheriff and then our county commissioners and city commissioners. The ballot is going to take a long time.

So the candidates are out there stumping. So are their surrogates. I was lucky enough to be able to walk directly across the street from my office to Huizenga Plaza (where we actually have one of our public artworks!!) and stand in a crowd to listen to Hillary Clinton. I was one of those staunch supporters of the Clintons . . . both Bill and Hillary. I know there are many people that don't agree with me, but that is really okay. This is America where we are free to make our own decisions. I am sorry that she didn't win the Democratic nomination, but I applaud her for continuing in the fight to get a democrat in the White House.

I will be voting in the early voting days which started yesterday. My sample ballot is sitting right here on my desk at work so that when the line gets a little shorter (yesterday it was more than an hour wait to vote) I will be marching down there to cast my ballot.

These are two photos, one that I took and one that someone in my office took. I LOVE the one of Hillary with the book over her head because the heavens opened up and poured on us for about ten minutes, but then let up. Finally someone came out with an umbrella for her. 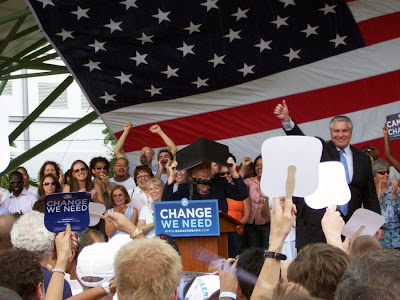 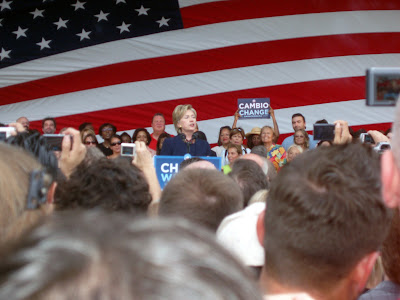 Posted by Jody Leshinsky at 8:15 AM