So with Rachel back to Indiana and Adina at a debate tournament that lasted all day and most of the evening, Joel and I had plenty of time to do whatever.

So we filled our time. In the afternoon we went to a holiday party for my Cultural Information Center volunteers. It was held downtown at Briney's Pub. We had about 35 people there and I got to see one of my former employees. I actually had to lay him off due to the reduction in force (as the County calls it). However, that same week he got a job as a history teacher at a private high school! So I was pleased for him.

In the evening we went to not one . . .but two events! The first was a wine tasting event at the Kaplan's house. The second was a birthday party for my photography teacher. He threw himself a party at Timpano's on Las Olas Blvd. We really had a full day and lots of fun.

It was a VERY cold day for us. The temperatures really never got warmer than the 40s and I took a photo of the temperature gauge on my car to prove it! It wa 39 degrees at about 7 p.m.!!! 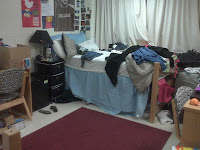 Once Rachel got back to the dorm, she rearranged the furniture because her roommate dropped out of school so for now, Rachel has a single room. We are sure it won't last, but she is enjoying it while it lasts! According to this photo, looks like she made herself right at home!! 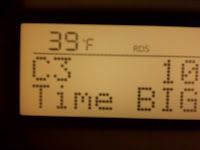 Here is actual proof of the temperature!! 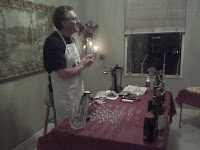 And, here is Richard telling stories about each of the 20 wines placed on the table in front of him. He talked so long that I didn't get to taste any of them because we were off to the birthday party!! Oh well. Next time!
Posted by Jody Leshinsky at 10:16 AM