All Things Have a Beginning and an End 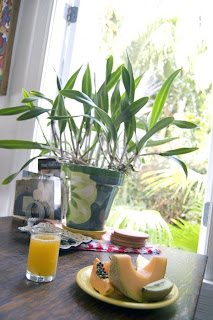 The last day of our Key West adventures began with a slow breakfast in the kitchen. Every morning there was a beautiful array of fresh fruits and fresh baked goods on the counters. There were baskets of oranges for freshly squeezed juice and other assortments of cereals, breads, jams and coffee. This morning I had orange juice, papaya, kiwi, cantaloupe and a slice of key lime pie! Yeah, so what? I was on vacation, who cared about eating dessert for breakfast?? 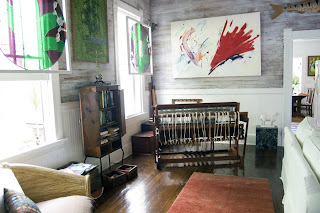 This photo was taken in the living room. There is Dade County Pine on the floor and walls which is fire resistant but also extinct! In the corner of the room is a loom which the owner of the B&B works on and in the other corner is a guitar which Rachel played one evening. Along the walls are many books about artists and about the history of the Keys. The only rooms that have air conditioning are the bedrooms, but at night it isn't too bad inside the house and the kitchen also feels fairly cool in the morning. 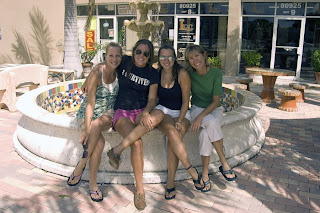 On the way home we stopped off at our friend's house in Islamorada. We haven't seen them in about 15 years! They used to live in the same complex as we do now and Rachel and their oldest daughter, Alison, were best friends at two years old! They got along immediately and Lesley and I chatted for FOUR hours to catch up after not seeing each other for so long. They had moved away to England for about seven years so that is why we fell out of touch. But the internet brought us back together! 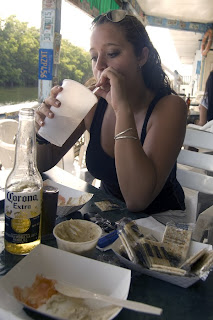 Instead of taking the US 1 route home, we took Card Sound Road. It is a beautiful, winding road that is surrounded on either side by Sea Grape vegetation. Every once in a while there is a gap in the bushes and you see the Everglades peeking through. It is quite scenic. At the end of this stretch is a restaurant/bar called Alabama Jack's. Rachel had been there before with her friend and wanted to stop there. So we did. We got some smoked fish dip and crackers and I got a beer and we just chilled for about an hour. I also didn't tell her that I was purposely killing time!! 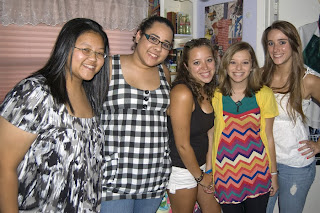 And when we got home Rachel's friends were hiding in her closet to surprise her with a goodbye party at our house! Rachel really was surprised!
Posted by Jody Leshinsky at 4:08 PM