Ok, so I am trying to get back into the swing of taking daily photos. It isn't easy once you have slacked off for so many months . . . hmmm. . . sort of like getting back into going to the gym? These are not THE most interesting of photos, but it does document my day!

Monday was a mental health day for me. I took the day off from work because I knew that I could spend the day with Joel. I also knew that since I already had Veterans Day off on Tuesday, this would give me a long weekend to unwind.

The girls had to go to school and we were up bright and early. After the girls left for school, Joel and I took the cats to the vet for their annual check up and shots. My goodness, you would think that we were torturing them with the sounds that were coming out of the pet carriers in the car! I couldn't catch the sounds on the way to the vet but I got a little of it on the way home and I uploaded the video below. That is WAY quieter than it was on the way to the vet's! I couldn't help but giggle all the way to the vet. Joel was getting nervous because he never saw Newton pant before. But everytime I took him to the vet last year . . . with the exception of when he was only two weeks old . . . he behaved like we were torturing him! 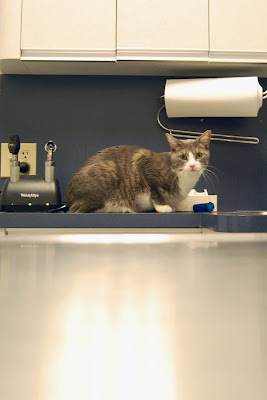 We let Newton out of his carrier and he immediately jumped down onto the floor and started his exploration of this strange new world. Then he jumped up onto the sink area and I snapped this with the stainless steel table in front of me. I think it makes him look like a lost and frightened child, which he probably was. But he was just fine 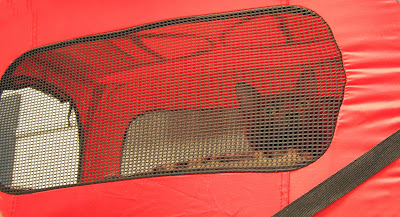 Here is Grace all wide-eyed, staring out of her cage wondering what is up and what is next? We were waiting for the doctor to come and see us and Newton was walking around the office, exploring the odd smells and nooks and crannies while Grace preferred to just wait it out in the safest spot, and softest (I took their leopard matting that they sleep on and put that in the bottom of the pet carrier).

Once we were finished at the vet, which took all of 15 minutes since we have nice healthy animals, we took them home, listened to their meows once again and then we did a little paperwork (bills, resumes for Joel and other stuff).

Then we decided to head out to the movies. We have been wanting to see "W" and the girls didn't so this was our opportunity. Somehow it makes me feel guilty to go to the movies in the middle of the day on a Monday. But we did it and I am glad. It almost (and I do say almost) makes you feel sorry for George Bush for being mislead by his team of cronies. It really was an excellent film and Oliver Stone really captures all of the personalities. I am sure there was quite a bit of artistic license, but overall, worth the money.


Later in the day we did a few more errands and then decided to meet the girls for a quick dinner and head off to the movies (AGAIN!!!) to see "Madagascar 2." It proves that Rachel is still not too grown up to go to the movies with Mom and Dad and her sister. The photo below is the girls whooping it up with their Publix-brand candy and a HUGE bottle of water before the film started. We had to tell them to settle down a bit because they were having way too much fun with way too much noise! 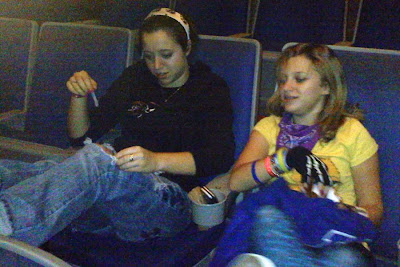 And this is the video of the cats, I can't send a long file from my phone, so it is rather short, but you can hear Newton crying to let him out!

Af
Posted by Jody Leshinsky at 7:33 AM