As I do every year, I purge my closets of things that I have no use for. This year I cleaned out my clothes closet and the closet in the living room.

From my closet I pulled out four bags of stuff that I never wear. That will go to Plato's Closet or Goodwill later this week or early next week. That was an eight-hour project. But it was well worth the effort once everything was back in place and the vacuuming was completed!. 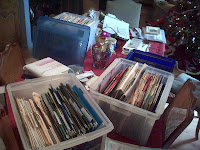 This first photo shows the dining room table with all of my containers of files and papers spread out. There was much more on the floor and on the couches throughout the living room! I can't believe how much STUFF we hoard! It felt so good to go through the STUFF and throw away whatever I haven't touched in more than a year.

I amassed three bags of papers and one pile that still needs to be shredded and thrown away. Feels wonderful to look into the closet and actually see the floor! 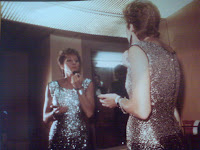 I was wearing my mom's sequined dress that she had worn to my cousin Dennis' bar mitzvah in the 1960s! The party took place on a ship in the Port of Miami and this suite belonged to Michael Talbott, one of the stars of Miami Vice who Joel did personal publicity for during the duration of the TV show.

You can see Greg in the mirror taking the photo of me.

There aren't many photos that I like of me, but this is one of them.

Adina and i ended up sitting in the kitchen until 1 am looking through all of the photos in the boxes that I had dragged out of the closet! That was the first time that she actually showed any interest in our family history. So then there is always a reason for things that take place. And now I have two clean closets . . . for now!!
Posted by Jody Leshinsky at 3:36 PM