Although the reason I was in New York was for such a tragically sad reason, I kept finding ways to cheer people up.

My sweet 48 year old cousin Scott had a heart attack and passed away on Christmas morning. He leaves behind three beautiful children and a wife. A home in East Meadow, complete with a dog, a backyard, a BBQ pit and fire pit where he loved to shoot the breeze with his many, many friends over a beer or two. He also leaves behind the hearing aid business in which he was a partner with his dad, my mom's closest cousin.

It was so unbelievably sad, but right here in his home, as we sat around the table and solemnly ate the food from the trays and trays of food brought in and served to us by the friends and neighbors who were taking care of Scott's wife and children with kid gloves, I found a bit of humor. I took my time. I sat in the living room next to Jennifer, Scott's almost 19 year-old daughter and showed her this photo that I took.

She smiled. The first smile that I had seen on her face since I arrived in New York. She got it.

You see, this is a photo of my cousin Steven, her uncle. Next to Steven is Steven, her other uncle (her mom's brother) and his partner of more than two decades, Steven!

Then when I told her the story about my cousin Steven who was dating a guy named, what else, Steven!! She actually laughed! That was the best sound!

The four Steven's used to get together and go out. Could you imagine it? "Hi, I am Steven, this is Steven, Steven, and Steven!" 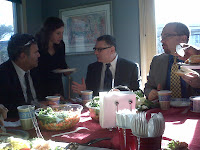 Posted by Jody Leshinsky at 2:55 PM