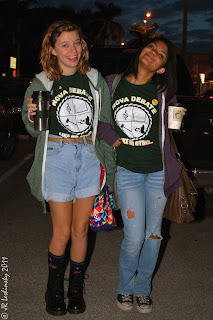 This weekend was the Titan Invitational Debate Tournament at Nova High School.  When Nova hosts the tournament, all of the students and parents volunteer to run the event and do not compete.  Joel volunteered to judge and I volunteered to be their photographer.

I won't post the other photos because I don't have media releases, but I will post this one of Adina and her friend, Olivia.  Olivia is a parade!  She (and Adina) talk a mile a minute and come up with THE most creative conversations I have ever heard.

We had to be at school at 7 a..m.  Luckily there were bagels and coffee!  Although I had to wait until 9 a.m. because they ran out by the time I was ready for my cup!  So I tagged along with Joel and watched the four kids competing in the Dramatic Interpretation or DI.

It took me every ounce of effort to not cry during their performances.  Each one had a very unique piece and each performed it with such intensity that it was believable and poignant.  After the last kid left the room, the tears flowed.  They were all great.  I could never be a judge.  In fact, I would be the Paula Abdul of judging!  You have to be able to rate them from 80 to 100 and then rank the in order.

One performance was about a gay teacher in Wyoming and he was the person who found the dead body of Matthew Sheppard -- this was from the Laramie Project.

Another one was about the Amish children gunned down in a schoolhouse.  This girl was the wife of the killer.

Then there was a piece about a black girl who was taunted by the students at school because she was black, but she was a natural born daughter of two white parents who happened to have some black relatives in their ancestry.

All very intense.  I don't know how they do it, but they are all really good at it.  I have only seen Adina's piece one time at home.  She does Humorous Interpretation or HI and her piece is from the Great American Trailer Park Musical.

Posted by Jody Leshinsky at 1:49 PM