Once again, our friend, Celia, invited us to attend one of Don King's boxing matches. Joel used to work for them back in the 80s and over the years we have stayed in contact with Celia. She is unbelievable and works so hard for Don, but she has the sweetest and biggest heart you would ever want in a friend.

So we took my dad and Adina to the Hard Rock Cafe. First we ate dinner at the food court, which was okay, but I can't stand the smell of the cigarette smoke. They don't smoke near the restaurants, but they do smoke EVERY other place in the building and outside the buildings. I always forget that we are on the Seminole Indian reservation and their laws are different.

After dinner, I met Celia at the entrance to the hotel where she gave me our tickets. She had two sets, so we were not able to sit together. Adina and I sat with Celia and her friend, Joanne. We were ringside, directly in front of the fight. I had NEVER been that close to a boxing match before. 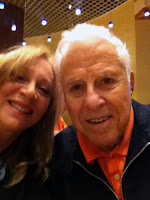 It is really weird to hear the sounds of the boxing mitts hitting the body. It is a deep, dead, thud! But hey, there is a definite art to boxing. I was amazed at the agility of the footwork and the endurance of these guys. It isn't so much about hitting each other, it is more about the how to avoid getting hit, or how to swing your arm while blocking a punch and moving in constant motion so that you don't get caught in the corner of the ring or in the case of one of the fighters, in between the ropes before the referee comes to separate them.

At first, Celia asked me to put the camera away because Don King Productions owns these images. So I did. But later she just turned the other way and I snapped away. 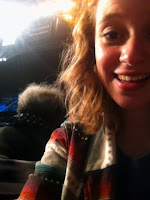 Right before the Main Event, everyone who was someone (and even a few who just crashed the party) was inside the ring. With all the country's flags, one guy sang the national anthem of Panama (you will see a photo of Robert singing his heart out) and then another guy sang our national anthem and when he got the words wrong, Adina whipped around and looked at me in amazement!

In front of us were the Reverend Al Sharpton and John Walsh. I had met John Walsh at the last boxing match at the BankAtlantic Center. He scared me when he grabbed my hand, put his face in my face and said, "MOM, does your daughter have a Facebook page?" And at that point, I honestly didn't know! Adina was only 14 at the time and I turned to her and asked her if she did. And she said, "yes." Well, that is when John, who was still holding my hand, said, "you better keep your eyes on her!"

After the fight we tried to get everyone into the after party, but there weren't enough wristbands so Robert and I stayed and Adina and my dad went home with Joel. Robert and I stayed until about 2 am but since it was the night we get to turn back the clocks, it was REALLY only 1 am. However it didn't make up for the fact that I was just plain old tired and ready to leave not long after we arrived. But I had a good time. There was food and desserts and Melvin and the Bluenotes entertained the party goers!

The event was in the same place where I saw the Beatlemania show a couple of years ago with Richard and Lynn.

I even got a photo of me! Robert took this from where he was sitting.

To see more photos from this event, click here.
Posted by Jody Leshinsky at 4:34 PM