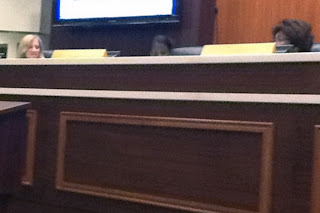 I know that I have given 30 year of my life to work as a public servant, however, tonight I started my new public service . . . I was appointed to the Code Enforcement Board for the City of Lauderhill.

It is my city.  A city I have lived in for almost 32 years, with the exception of a couple of years in Tamarac.  Joel has given so much of his time, effort, creativity and expertise on board after board, I decided it was my turn to give a little.

So when my good friend, Mayor Kaplan, asked me to serve on this board, I agreed.  It wasn't anything like I thought it would be.  I had a little bit of a learning curve, but by the end of the meeting (which really moved fast), I made a motion to fine one of the violators.  It wasn't difficult, I just had to learn the ropes a bit.

Joel came with me to lend his support and to play with my iPad!  He snapped this photo with my iPad.