Thanks to the accident that we had on March 5 . . . we have all been going for treatments at the chiropractor at least three days a week.  This week I had to go for an MRI on my neck and spine.  They said it would take two hours, so I will be doing this again next week because there is no way that I could possibly stay in that machine for two long hours.  And of course, the second they say, don't move, don't even swallow . . . that is the first thing I want to do!  This first photo was taken at the MRI place while waiting.  Speaking of waiting, why is it that we always have to wait in a doctor's office?  What ever happened to keeping appointments?

Well after the MRI I was hungry so we were close to Denny's and since it was still really early in the morning, I really wanted pancakes!  Little did I know that there was a bacon festival going on!  Did you know that there is a bacon pyramid?  And did you know that they actually serve a bacon sundae?  Yuk!  Sorry, that one doesn't sound appealing to me at all.

While we were at Denny's, I saw a man, clearly inebriated and in need of food.  So we called the manager over and asked him to please let us buy the man breakfast.  The manager came back a few minutes later with change because he said that he didn't want a full breakfast, only a biscuit and coffee.  So this photo is of my change.

Later in the day I went to an artist's studio in Oakland Park because she needed some photos of her working on her art.  Adina came with me as my assistant.  We spent a couple of hours there and really had a ball. 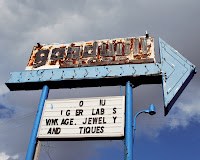 Afterwards we stopped at the Goodwill store that is on Oakland Park Blvd.  We found out that they are moving to a new location.  It is sort of sad because this store is a bit of a landmark.  Although I found out that the building won't be leveled, it just will not be the store for the public anymore.

When we got home, Joel was hungry so we didn't even stop, we just picked him up and drove to Scutto's -- a favorite place of ours.  It is owned by Joey Scutto, a City of Sunrise Commissioner.  It is always fun to go there because not only does every single family member work there, they all sound like they just stepped out of Brooklyn.  And then you never know who you will run into there.  On Saturday night we ran into Broward County Commissioner Ilene Lieberman and her husband, daughter and daughter's fiance.  Ilene and Joel have known each other for about 20 years because she used to be a City of Lauderhill Commissioner before she became a County Commissioner.  The funny thing is that she almost didn't recognize Joel because Joel lost so much weight!

After dinner we dragged Joel to Tate's Comic Store because upstairs in the Bear and Bird Gallery there was an art exhibit opening and we wanted to see the art.  The theme was fairytales and there were some extremely interesting twists on the stories.  My favorites were the pen and watercolor.  My dream is to learn how to do watercolor.  I would like to paint some of the images that I have shot over the years.  But I don't want to start this until both girls are out of the house so that I can create an art studio in one of their rooms!

The surprise of the evening was the pot belly pig who came out of her cage but the poor thing was terrified of the people.  She did take a liking to me and stuffed her snout into my face while I was trying to take her photo!
The Leshinskys can take an ordinary Saturday and fill it with mundane things but make an event out of it!

Posted by Jody Leshinsky at 5:54 PM