Chinese New Year -- the Year of the Tiger

So I had to go to the grand opening of the new Gay and Lesbian Community Center on Friday night. Since it was on the east side of town in Wilton Manors, I met my family at Happy House Chinese Restaurant on Andrews Avenue. The owners are the parents of Rachel's friend, Pearl.

While I was at the grand opening the skies were getting darker and darker and as I got into my car the heavens opened up. As I was driving on 38th street a bolt of lightning came really close to my car and scared me. I think I actually screamed pretty loud in the car, of course no one heard me! I couldn't even get out of the car until the rain stopped a bit. So I was sitting in the parking lot for a long time.

When I went inside the restaurant, there was Pearl. Instead of saying hello, I said, "what the heck are you doing here?" Because she goes to University of Florida in Gainesville!! Well apparently, I wasn't' the first one to say that to her.

It was really nice though because we used have have really long discussions when she would come to our house. I didn't realize how much I missed her too. We talked all the way through dinner! I made Joel take this photo of us. A bit on the blurry side, but hey, it is a cell phone! 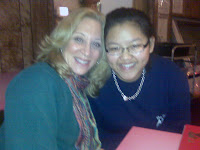 Posted by Jody Leshinsky at 7:20 PM