Work. Sometimes work is a lot of fun. We have a column in the Go Riverwalk magazine and the next issue will be about Cinema Paradiso's 10th Anniversary. Cinema Paradiso used to be a church and then the Vinnette Carroll Theatre and ten years ago the Fort Lauderdale International Film Festival took over the operation of the building and started to show independent films year round.

So we needed a good photo to go with the article and I was elected to shoot it. I actually like the end result! 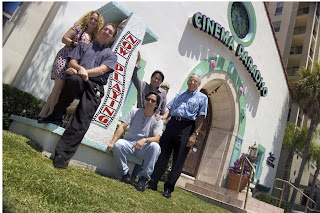