Broward County is now home to its very own TV show. It is called "the Glades" and it premeiered on Sunday, July 11 at 10 PM on A&E.

Joel and I went to the premiere at Pier Sixty-Six. There were about 1,000 people there mingling and eating and drinking. We saw a few celebrities . . .Jonathan Frakes from Star Trek the Next Generation and a soap star from General Hospital, one that I never watched so I have no idea who he was.

As we walked in there was a "blue carpet" and a photographer to make us feel like we were in Hollywood!  It was weird being in front of the camera for a change.  I was observing the photographer's skills and now that I see the end result can't figure out for the life of me why he took such a wide shot??  With that backdrop you aren't supposed to see anything else but the people and the backdrop.  I had to crop it in, WAY, WAY in!

there were many people there that I knew and got right to work introducing Joel to them!

After feasting on the many different varieties of cheeses, dips, salads and carving station items and then drinking whatever at the many bars set up around the perimeter of the room, we were ushered into a ballroom to watch the premiere of this new television show.  Of course they provided us with popcorn, ice cream and other fattening goodies to keep us happy.

But I liked the show.  In fact, when we went home, I watched it at it's airing time with Rachel to see her reaction.  It isn't overwhelmingly wonderful, but it is written well, filmed well and it is fun to see the South Flroida landscape!

Lets hope the viewing public likes it and the network keeps it in Broward! 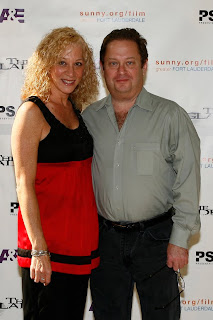 Posted by Jody Leshinsky at 4:37 PM