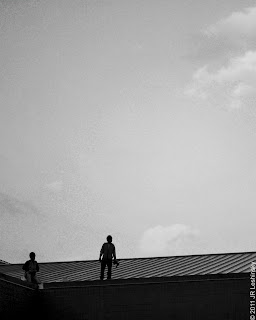 I got to the Tallahassee airport a bit early and I didn't want to just sit in the terminal because it was such a nice peaceful morning and really nice weather.  So I pulled out my camera to snap at . . . well at whatever.
I had just finished two grueling days of advocacy in the State Capitol lobbying for arts funding.  I was completely exhausted having walked from one side of the Senate to the other side of the House buildings and then up and down the hallways of the Capitol in the middle.  I must have walked at least 10 miles a day.  My feet hurt, I was tired and cranky, but it was a job that had to be done.
As I turned to walk into the terminal, I saw these two workers doing their job on the roof of the building.  I just liked the juxtaposition of them against the morning sky.  It was about 8 a.m. and the sun was behind me.  Then when I was looking at these photos, I decided to turn it into black and white.  I really like the tones of this photo.  Sometimes it make a photo timeless.
I had a bunch of others, but I really liked this one the best.
Posted by Jody Leshinsky at 11:47 PM